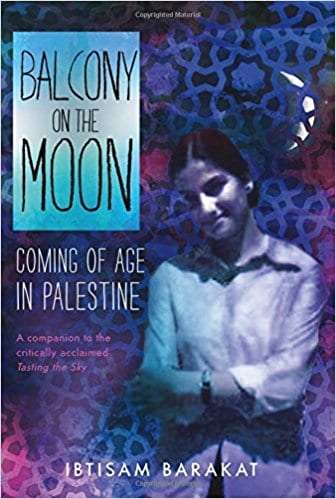 Balcony on the Moon: Coming of Age in Palestine by Ibtisam Barakat

Balcony on the Moon: Coming of Age in Palestine by Ibtisam Barakat is a memoir about Barakat’s struggle to finish school and become a writer while growing up in the West Bank.  It is about her search for an identity as a Palestinian, a people without a country, and her determination to be valued and respected as a girl in a society where women have few rights.

Her memoir focuses on her life as a young girl through her teen years during the 1970s.  As a girl in a family of seven children, she had many responsibilities both in the home and in school.  Her father struggled to make a living.  He was a truck driver who loved driving but suffered from narcolepsy, an illness that caused him to fall asleep suddenly and without warning, which made his job both stressful and dangerous.

Her mother was busy raising children and keeping the family together while bemoaning the fact that she had to get married and start a family before she was ready to.  Her mother eventually decided to go back to school to complete her education even though her husband was against the idea. Ibtisam was able to help her mother study and obtain a 9th-grade education so that she could then pass the test to attend an alternative high school.

Ibtisam clearly inherited her mother’s strong personality and desire for an education.  Her deep love of learning and language shines throughout the book. She attended various all-girl schools run by the United Nations Relief and Works Agency.  At each school she excelled in all her classes and was always at the top of her class, often winning awards and accolades.

Her home life was often difficult.  Her father at one point became so depressed because of his narcolepsy and his struggle to support his family that he wanted to commit suicide.  His entire family was willing to die with him so that he wouldn’t die with the guilt of abandoning his wife and children. He packed his entire family, including his pregnant wife, into his truck to crash it but changed his mind at the very last minute.

Ibtisam resented the fact that her brothers had many more opportunities than she, as a girl, did.  She fought for the right to work to make extra money for her family and herself, she fought to have her opinions and decisions matter, and she fought to stay in school when her father wanted her to leave school to get married to a wealthy suitor.

Barakat’s strength, courage, and determination is evident throughout the book.  She faces the many obstacles she encounters head on and is always coming up with new strategies to successfully meet her goals. Her determination to never give up should be inspiring to all who read her book.