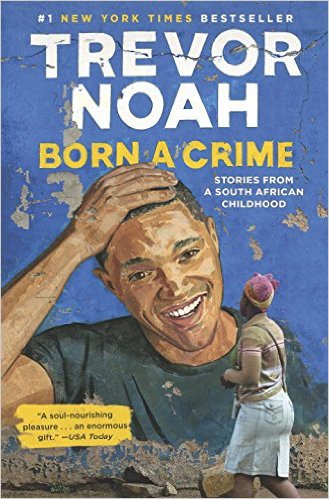 Born a Crime by Trevor Noah

Trevor Noah, host of the Daily Show, has written a powerful book about his South African childhood.  This book is by turns fascinating, horrific, funny, heartbreaking and hopeful.  As excellent as the book is, the audiobook is even better.  Mr. Noah narrates it; not only is he a brilliant reader, but hearing him read from the many short passages that are in a variety of languages such as Xhosa, Zulu, etc. is an absolute pleasure.  He is fluent in over a half dozen languages.

The title Born a Crime, tells of his birth during Apartheid when it was illegal for people of different races to date, marry or have children.  A child of a Xhosa mother and a Swiss father, Trevor Noah struggled with his identity throughout his life, both during the Apartheid years when he was literally “a crime” and in the post-Apartheid years.

Mr. Noah found it hard to find a place where he fit in because of his skin color.  He grew up with his Xhosa mother and relatives and identified as black, but his skin color confused school mates and others he met.  In Apartheid South Africa people were split into groups based not necessarily on their language or ethnicity, but on their skin color. People were labeled as black, colored, Indian or white.  Most people who saw him thought he was colored, but culturally and linguistically he was black.  In Apartheid South Africa, siblings of the same parents could fall under different classifications based on their looks.  One child may be labeled as black while a lighter sibling could be labeled as colored.  The colored child would then have opportunities that the black child didn’t.  These classifications tore apart the country as well as families.

How did Trevor get through the many hardships in his life?  His most powerful and devoted supporter, teacher and guide throughout his life was his mother, a religiously devout woman who dedicated her life to making sure Trevor would have as many opportunities as possible in his life. Opportunities she never had. She accomplished this by raising him in a loving but very strict home, providing him with plenty of books and making education a priority, and making sure Trevor learned English, the language necessary to succeed in South Africa, as well as several native languages.

Trevor’s multilingualism helped him to socialize with several social groups in school, though he didn’t feel like he belonged to any one of them.  He realized that speaking a person’s language helped him fit in more than the color of his skin.  At a young age Trevor found that his natural sense of humor could also help him fit in and help him cope with life.  Making people laugh made him popular among his school mates and friends, even if he didn’t entirely fit into their cliques.

In addition to his difficulties fitting in and growing up under a degrading, oppressive, abusive government that provided few if any opportunities for happiness and a productive future, his mother later married a man that was all charm on the outside but, once the “knot was tied”, revealed the ugly and abusive side of his personality.  The family, including his new brother, soon descended into poverty while his step-father drank any profits his car repair shop made.

Born a Crime chronicles Trevor Noah’s struggle to escape racism, poverty, and abuse, but this book is far from all doom and gloom.  It includes some hilarious escapades from his youth including an incident in his early childhood involving “poop”, his disastrous date to the school dance, and a gig where he pretended to be a famous rapper from the US.

In the end, Trevor Noah’s hard work and perseverance, along with his mother’s love and support helped him on his way to becoming a successful comedian both in South Africa and in the United States.