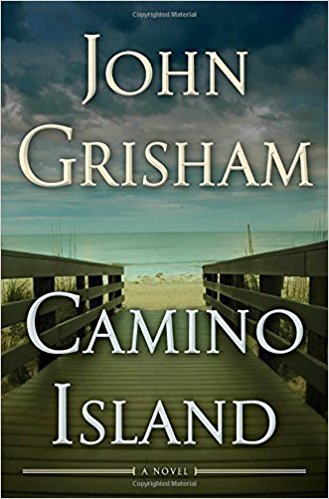 Camino Island by John Grisham is an easy to read book. The characters are interesting and the story has a lot of promise. After the rather long beginning, the story draws the reader in and it is a light, fun read. That earns the story 3 stars, but I expect more from Grisham.

Spoiler alert. The remainder of the review contains a lot of story details which I go into in order to show how badly the book missed opportunities.

The beginning of the book, Camino Island, is told in the third person and is meant to setup the scene for the story.  This third person narration is somewhat interesting, but not particularly engaging. After 50 or so pages, I peeked ahead to see if that was the way the entire book went, and when I saw that it would soon switch into story mode, I continued.  The beginning of the story tells about the theft of rare manuscripts from a university archive. We learn a fair amount about the thieves, where things went wrong for them, and how the others sold off the manuscripts for cheap because they were afriad of getting arrested.

After the theft, we meet Bruce, the charismatic owner of a popular book store, with a large rare book collection, on the Florida coast. The private recovery team trying to retrieve the manuscripts for the University believe Bruce might be in possession. We also meet Mercer, a young writer who has had trouble getting back into writing after her early success. Mercer is hired to be a spy to get friendly with Bruce and find out all she can to help determine if Bruce has the manuscripts. If he does, then the FBI can swoop in. The recovery team is hidden on site with spy vans, cameras, and microphones following every move.

Why Mercer? She grew up on the Island, living with her Aunt, so it would be natural that she would return to her home on the beach to try to get back into writing. Mercer’s Aunt died under somewhat mysterious circumstances and the reader gets the sense that Mercer would like to know more of what happened. At this point, if you are like me, you think maybe this will play a role in the story.

There is a writer community on the Island and Bruce is a central part of that community. Bruce is “married,” but in an open relationship. There are rumors that he has casual sex with women authors who periodically visit for book signings. His wife runs a high-end antique store next to his bookstore. Mercer is likable and Bruce has his eye on her. All the while, the recovery team is getting every detail. To nudge things along, the recovery team poses as rich shoppers and buys out the wife’s store sending her to France to restock. With the wife gone, Mercer manages to worm her way into Bruce’s life.  She sees and, using a spy cam, photographs the two stores, including the basements and the interconnecting doors between the two buildings.  They sleep together, and to show off, Bruce shows her the hidden manuscripts. Mission accomplished, they now know Bruce has the manuscripts. At this point, the story falls apart. Instead of being cool, Mercer totally, totally freaks out that Bruce would have anything illegal, even though her whole purpose was to find out.

Just about this time, the crooks, who decided they sold the manuscripts too cheap, find Bruce and the shop and must be planning themselves to snatch the manuscripts. You would expect the suspense to ratchet up. The recovery team plans to raid the store, but it takes a few days to get the warrants. Because Mercer freaks out, Bruce decides to move the manuscripts and using the basement door between the buildings he takes them next door and has them shipped to his wife in France. The crooks are casually arrested. The FBI storms the bookstore, but nothing is there. The story is pretty much over.

So there never was a tie in with the mystery of the Aunt’s death. The crooks, who we learn so much about are casually arrested. Even though the recovery team is well manned, has camera footage of everything and all of the latest spy gadgets, Bruce is able to easily move the manuscripts. You would think they would be watching like hawks to make sure he didn’t move them.

Camino Island seemed like it may have been written by more than one person and that the plot was cut and simplified to make it fit a standard book length. Somewhat disappointing.