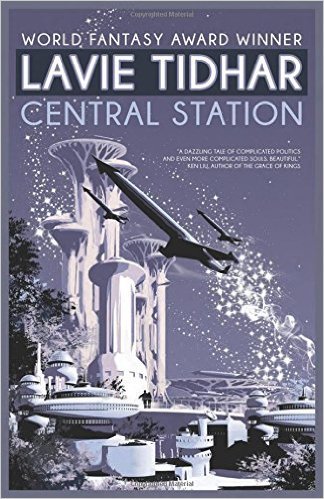 Central Station takes place in a Tel Aviv of the future…far enough into the future that humans now have colonies spread throughout the solar system.  Central Station is the dominant feature of Tel Aviv; a space elevator where flights arrive and depart from all over outer space, and, as such, have inhabitants from every imaginable background and all walks of life.

Each chapter of Central Station was previously published as a short story.  These short stories were then modified and bound together to form a book about the everyday goings-on in and near the space depot.  This Tel Aviv of the future is so different and so alien to the Tel Aviv of today, that the more we read the more we realize that while everything has changed, nothing has really changed; the more technology advances and we rely on technology, the more technology relies on us.

The characters in this story include modified humans implanted with nodes and genetically-designed babies grown in labs; vampires that suck data and not blood from its victims; robotniks: part human, part machine zombies; Others, virtual beings that live in the data stream called the Conversation; Martians that live as parasites on humans and humans who are considered handicapped because they can’t connect to the conversation.  Most appliances and electronics have attained some degree of consciousness while Others live only in the virtuality and most humans live in a mix of the virtual and reality.

The Tel Aviv of Central Station is a colorful, rich and vibrant city filled with tourists, immigrants, refugees, religious pilgrims and settlers from all over the world and solar system.  It is also a city that has seen wars and still struggles with poverty.

In the telling of Central Station’s story, we personally meet several of the inhabitants and learn about their joys, fears, and struggles.  For as much as life has changed in this future Tel Aviv, its inhabitants, in all their many variations, still struggle with illness, alienation, loneliness, addictions, and identity and search and yearn for love, purpose and meaning.  We learn that, in the end, it is family, belonging and love that matters the most, no matter who you are or when and where you find yourself.

This book is very creative and engaging.  As different as life in this future is, the characters are all very credible and real.  I’d love to hear more about Kranki, a boy who was created and grown in a lab, mostly put together with cheap and open-source genes, and who has special abilities.