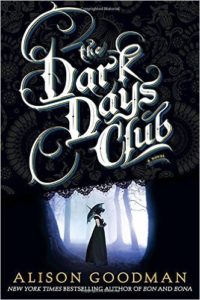 I just finished listening to The Dark Days Club by Alison Goodman.  The narrator, Fiona Hardingham, an accomplished actress and reader, picked me up, transported me to Regency London and set me down among the aristocracy.

It is 1812 and Lady Helen Wrexhall is 18 and ready to go out and live life to its fullest.  She is eagerly and nervously preparing for her upcoming debut at the royal court, after which her life will be filled with friends, balls, excitement and rendezvous with possible suitors. The end goal of all this fun is to find a suitable husband to settle down with; one that will bring honor, fortune and social standing to the family.

While Lady Helen Wrexhall is ready for entertainment and adventure, she is not ready to settle down.  Lately she has felt charged with a new and growing energy that has her excited but concerned.  Her mother was thought to have gone mad shortly before her and her husband’s death at sea when Lady Helen was a child and Helen worries she may have inherited her mother’s tendency towards “madness”.  She and her older brother have been raised by their Aunt and Uncle who are also anxious about Lady Helen’s “tendencies” and want her married as soon as possible, before she destroys her chances for a husband of a proper wealth, property and rank.

Before I continue, let me say that this is the first book I’ve ever read set in the Regency era (1811-1820) except for Jane Austen’s books which were actually written during this time.  Honestly, I’m just not that interested in books about high-society debutantes looking for husbands.

Luckily for me and much to Lady Helen’s horror this story quickly changes direction and takes us into London’s supernatural underground.  Long before Buffy the Vampire slayer helped save people from vampires, Lady Helen was plunged into the world of Deceivers, supernatural beings that inhabit the bodies of unaware humans, while feeding on other humans and occasionally killing them.

She discovers that, no she isn’t going mad like her mother, she is a Reclaimer, one of an elite few with the power to fight the Deceivers. She is guided by Lord Carlston, a disgraced member of the nobility, to the Dark Days Club whose members struggle to keep the Deceivers in check, but have been recently losing the battle.  This secret society is known to only a handful, including the Queen.

As Lady Helen struggles to take this all in she needs to maintain her visage of normalcy.  Should she join the Dark Days Club and help her country?  If she does, she’ll no longer be able to marry and live a life that meets the expectations of her friends and family.  Her Aunt, Uncle and brother are already starting to suspect that she is going mad like her mother and are becoming increasingly alarmed by her odd behavior.  At the same time members of the Dark Days Club are telling her she doesn’t have a choice and must fully acknowledge and embrace her life as a Reclaimer.

I thoroughly enjoyed this book.  Alison Goodman is clearly an expert of the Regency Era and did a lot of research to bring us an accurate description of Regency London. The story is built around actual events, such as the assassination of Prime Minister Spencer Perceval and the hanging of John Bellingham, and many of the characters, especially the nobility, are based on real people.

This action-packed tale kept the pages turning and the characters were well-drawn and engaging.  The book ended while story was still developing and the story is continued in the sequel: The Dark Days Pact.  I’m guessing that this book was meant to set the stage for a number of sequels which will be even more action packed than this first one was.  I recommend this book for readers in High School and older.