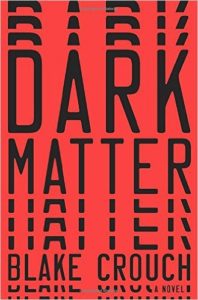 Dark Matter is a fast-paced science fiction/mystery/thriller of a book.  It is the story of Jason Dessen, a physics professor who had the possibility to make it big but decided to marry his girlfriend when she became pregnant with his child and settle down.  His life is good, if a bit routine and average.  When his friend and colleague wins a prestigious award Jason feels twangs of jealousy and resentment. With his talent and brilliance, he should be the one winning the honors and accolades. If only his life’s work hadn’t been sidetracked.   Just as he contemplates whether or not he made the right choices in his life, he is kidnapped, knocked out and wakes up in a place where everyone seems to know him, but he doesn’t know any of them.  He is in a world that isn’t his own.

The premise of this story is that we all live in a multiverse; a reality where every choice we can make is actually made in some other universe. In other words, there is a universe for every possible action or outcome.  Countless universes where we don’t even exist and countless universes where we do exist but have taken a different path at some point in our lives, made different choices, or had different choices presented to us. Every possible reality IS a reality in some other universe.

The story quickly morphs from a “walking-paced” novel to a “racing-paced” sci-fi thriller.  While trying to make sense of things, he is also running for his life.  He ducks in and out of many realities while trying to figure out how to find his “one” universe among the infinite number of universes that exist. The action of the story continues to increase until it hits whirlwind speeds.  I recommend Dark Matter to anyone looking for a short, action-driven, edge-of-your-seat story.