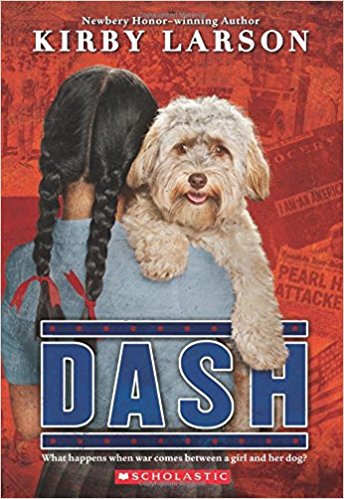 Following the bombing of Pearl Harbor, over 110,000 men, women and children of Japanese descent were forced from their homes and into internment camps. The majority of the interned were American born citizens. This story is based on the true story of Mitsue Shiraishi and her dog Chubby.

Life in Seattle is good to 11-year old Mitsi Kashino. Her close-knit family includes her parents, brother and Obaachan, her grandmother. She is a conscientious student and has two good friends, Mags and Judy. Mitsi loves the routine and rhythm of her days, but best of all she loves her dog Dash who is always ready to play and put a smile on her face.

Then, on December 7th, 1941 everything changes with the bombing of Pearl Harbor. Mags and Judy start avoiding her as do the rest of the school children.  Strangers call her names and bully her. Even her parents are on edge with the uncertainty that the future may bring. Thankfully her beloved Dash is there to offer her comfort and friendship in her confusion and loneliness. Mitsi can only hope that things will soon go back to normal.

Instead, everything falls apart.  Japanese Americans, including her family, are being sent to Camp Harmony, an internment camp and no pets are allowed.  Not only must she give up her home and all of her belongings, she will lose her dear Dash as well! Her neighbor, Mrs. Bowker, agrees to take care of Dash while she is gone.

Life in the camp is hard.  The food is bad and there is a lack of space and privacy.  One day, much to her surprise, Mitzi receives a letter from…Dash! With Dash as her pen pal, Mitzi finds the courage and strength to continue amidst the chaos and sorrow. While her brother gets into trouble, Mitzi makes a new friend, looks for the positive and finds the courage and determination to see things through.