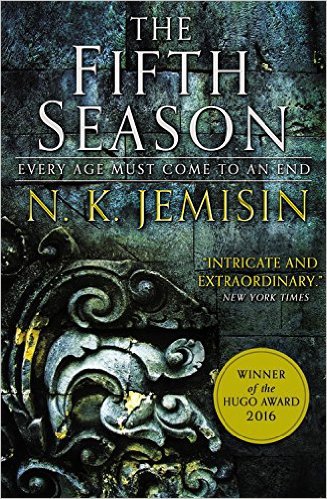 The Fifth Season by N.K. Jemisin

The Fifth Season is a compelling and multifaceted story set on a geologically unstable and volatile “Earth”.  Earthquakes and volcanoes are a constant threat and if severe enough can cause a fifth season, or extended winter, due to the amount of dust and ash sent up into the atmosphere.  Tsunamis created by “shakes” can wipe out entire coastal communities.  The effect of the ensuing fifth season can last for years or even decades and is marked by widespread death and destruction as well as hunger, sickness, ruined water supplies, and destroyed crops.

People live in comms (communities) and each comm has emergency supplies and enough food stored to serve their members for several years in case of a fifth season.  Comms are usually walled and guarded and strangers are viewed with suspicion.

Orogenes, people born with innate special abilities known as orogeny, have the ability to manipulate the earth’s movement and energy.  These people are greatly feared because of their ability to create earthquakes and volcanic activity, but, at the same time, they are also needed to keep the comms safe by quelling seismic activity.

The story is told alternatively by three orogenes.  Essun is a middle-aged woman who left her comm and is searching for her young daughter who was taken by Essun’s husband, Jija, after Jija killed their young son upon discovering that he was an orogene. Syenite is a girl who lives in the Fulcrum, a place where orogenes are sent to train and hone their skills.  Orogenes who live in the Fulcrum are closely watched by Guardians who both protect and control the orogenes.  Damaya is a young girl whose parents discovered that she was an orogene and reported her to the comm’s headmaster who in turn had her taken away to the Fulcrum.

This tightly written story had me intrigued and captivated from the first page. Essun’s story is told in the second person, putting the reader in her shoes.  As you follow her story, you feel her pain, her anger, her hopelessness and especially her determination.  Many of the themes touched upon in this book are ones that we can see in our own society: the persecution of people who are different from us, the confusion that comes from needing or relying on people that we also fear and don’t understand, the ways history can be written, how society is shaped by those in power, how the oppressed can resist.

I’m looking forward to the sequel and hope to learn more about some of the mysteries set up in this first book.  I give this book 5 stars.