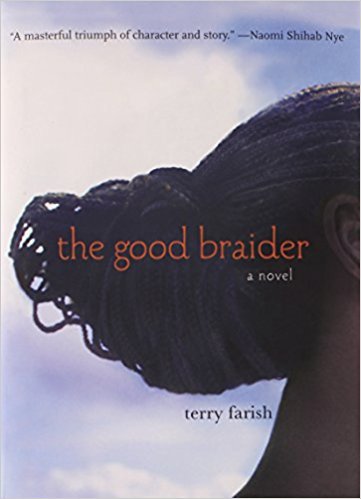 The Good Braider by Terry Farish

Viola lives in Juba, South Sudan with her mother, grandmother and young brother during the second Sudanese civil war.  Everyone in their community is experiencing the horrors of war: hunger, poverty, disease and the cruelty of the occupying government soldiers.  Soldiers who terrorize and kill civilians without provocation.  Who steal the food, kidnap the boys and rape the girls.

Many of the families are fleeing Juba and heading north to Egypt and from there trying to make their way to the U.S.  Soon Juba’s mother has no choice but to take her children and run for it as well.  Viola’s grandmother, Habuba, is too old to make the trip and is left behind, but Viola promises to come back to Juba one day and find her.

Viola tells of the family’s harrowing trip through Sudan to Egypt and the long wait in Egypt to be transported as a refugee to Portland, Maine.  Their trip is accompanied by fear, hunger, sickness, homelessness and death.  Their family is lucky and makes it to the U.S. where they are settled in Portland, Maine and given a new start with other South Sudanese refugees.

Viola is excited to be going back to school but is struggling to fit into the culture which is very different from her own.  Viola is finding it increasingly difficult to balance school, work and the demands of her mother.  Her Sudanese friends, as well as her ESL teacher, support her as she transitions to her new life, but her relationship with her mother, who doesn’t approve of Viola’s new attitudes and behavior, quickly deteriorates until things come to a boiling point.

This tragic story details war’s effects on children, families, and societies as well as the plight of refugees who flee to safer countries to save their families only to lose their sense of identity, dignity and the stability of their family life.

PrevPreviousBalcony on the Moon: Coming of Age in Palestine by Ibtisam Barakat
NextThe Passion of Dolssa by Julie BerryNext