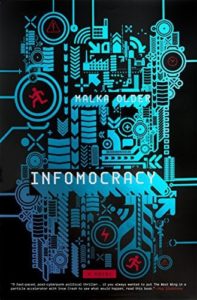 Cindy and I listened to Infomacracy together.  Christine Marshall did a good job as the reader.  Introducing a Science Fiction / Fantasy world is a challenge.  In this case, the transition into the story was not very smooth.  When we started listening we had trouble following the story and wondered if the playback of the recording had been sped up.  However, once we figured out who the characters were and had grasped a few threads of the story we had no problem.  We realized that the serial introduction of the various characters in the beginning of the book, without any initial thread tying them together, had been the issue.  We started the book following the news storms of the recent U.S. election season, so we were attuned to topics of political intrigue and the manipulation of information.  Malka Older’s futuristic view of elections and information democracy are very imaginative and were the hook that got us into the story.

Infomacracy takes place in the future, in a world of global micro-democracy, where each centenal, or group of 100,000 people, choose their own governing party in the election.  Some of the larger governments, those with the most centenals, include Heritage, Liberty, and Policy1st, along with some of the corporate-based governments such as PhilipMorris and Mitsubishi.  The government with the most centenals holds the “supermajority” and has more influence that the other governments.  Information is the neutral organization that provides the futuristic information services and runs the elections.

Ken is an election worker for Policy1st who is sent around the globe to gather information and watch for trends that can be used for election strategy.  Mishima is a combination of information analyst and Jane Bond super spy who works for Information.  They are the main characters who work together to unravel a plot to steal the election.  There was a love affair, but it was more complicated and not Jane Bondish.

The vision of a future political system based on information democracy, and the technologies people used, was very creative and one of the features of the story that I liked the most.  The story moved along and there were some exciting moments, but it didn’t have me on the edge of my seat.  The final mystery of the story is solved through data analysis.  Perhaps a storytelling genius can make data analysis thrilling, but in this case we are just told the final puzzle piece, which was not a very exciting ending. Given a little plot freedom, I could easily see this being turned into a movie thriller like Patriot Games.