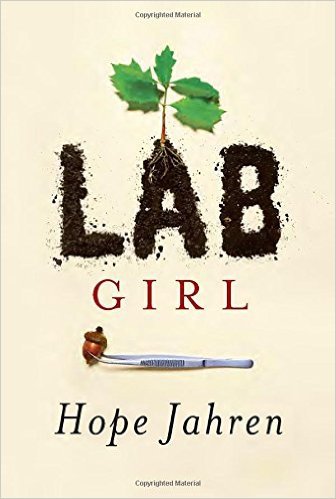 When my daughter and I went to Amicalola State Park in Georgia last month to do some hiking, I wanted to bring along books that would enhance and broaden our outdoor experience.  Just like finding the perfect wine to complement a special meal, I often look for books to pair with an experience or event.

Lab Girl by Hope Jahren was a perfect fit.  Hope, now a geochemist and geobiologist with a Ph.D. from the University of California, spent many of her happiest childhood days playing in her father’s classroom lab while developing a deep love for science.  She also spent time, a least in the summers, outdoors in her mother’s garden and around other plants, which included forming a special bond with a blue-tinged spruce.

Lab Girl is divided into three parts: Roots and Leaves, Wood and Knots, and Flowers and Fruit.  Each part describes both periods in her life and corresponding periods in the lives of various plants and especially trees. While describing many of her struggles during her life and barriers she had to overcome to reach her goals, she simultaneously describes the struggles trees and plants must endure to become established and grow and the barriers they must overcome to fully mature and produce the next generation of trees.

People who are successful in their field can often make it seem like their success was inevitable.  Like everyone, Hope has had her highs and lows in her life and career and tells about both; her academic successes, the need for scientists to constantly apply for grants to fund their research, the loneliness, her close friend Bill, the successes and failures, the difficulties of being a woman in a traditionally man’s field, and the delirious happiness that comes from learning and making new discoveries and to having your experiments work.  I enjoyed hearing about her specific projects and was especially interested in the short vignettes about various plants and how they cope in a constantly changing world.

As much as she chronicles similarities between growing up as a human and growing up as a tree, she notes that plants are really so different from us that we can never really understand them.  She ends by imploring us to look around at the devastation humans are causing to plants and therefore to ourselves and notes that “every year since 1990 we have created more than eight billion new stumps”.  Her final request is that if you own land then plant a tree, one that is suited to the area, preferably one native to your area, one that is strong with a long life span, and then take care of that tree.