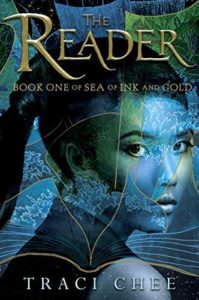 The Reader by Traci Chee

Sefia, the main character of The Reader, had a happy childhood and was loved by her parents and close to her Aunt.  However, they had prepared her a hiding place in case something bad happened.  One day assassins come and kill her parents and she goes into her secret room where she finds an unusual object, a book.  In this world, books are pretty much unheard of and no one knows how to read.  She escapes through a tunnel, finds her Aunt and they live their life on the run until one day the assassins catch up to them.  While Sefia hides, her Aunt is captured.  The Assassins want the book, but her Aunt doesn’t give Sefia away.  Sefia vows to unlock the secret of the book and free her Aunt, who is the only family she has left.

When Sefia was a child she had blocks with letters on them and her parents taught her the sounds.  with this knowledge, she is able to teach herself to read.  She also learns that she can use her sight to “read” the history of things.  This extends the concept of being a “reader” to being a “Reader”.  One day she sees a group of Impressors, people who steal boys and make them fight each other. They have a crate that has the same unusual symbol on it as the book’s cover.  Somehow there is a link between the crate and the book.  She sneaks into their camp at night and finds there is a boy inside the crate, who she frees and together they escape.

Meanwhile, there is a subplot involving a secret Library, a street urchin who, because he has the sight, is chosen to be the apprentice of the Librarian, and a girl, who is the Assassin’s apprentice and who is associated with the Library. I suspect these people will play a more central role in later volumes.  We learn about the regions and different factions in this world and a bit about the Library, which all come into play at the end of the book.

The first half of The Reader was very slow, somewhat choppy, and a bit unbelievable.  Because of this, I was tempted to put the book aside.  Fortunately I kept reading because about half the way through the pace picked up and it became exciting.   The prose was good and there were several plot twists at the end.  I was into the story enough to want to read what comes next.