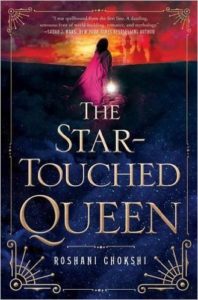 The Star-Touched Queen by Roshani Chokshi

The Star-Touched Queen takes place in the milieu of Hindu mythology: the worlds of gods, goddesses, demons, illusion, and reincarnation.  The story is about Maya, a young princess in a kingdom that has long been at war with the many surrounding kingdoms.  In a bid to bring peace, her father the king proposes that Maya choose and marry one of the competing rulers.  She is dismayed by this unexpected future thrust upon her and as she contemplates her choice, a mysterious stranger appears and asks her to run away with him.  Maya quickly learns that this stranger is not an ordinary person.  So begins her travels and travails through mythical realms, unusual creations, and lifetimes.

I was immediately drawn into the story and found it to be very creative and engaging.  The prose was very rich and the basis of the plot imaginative.  Unfortunately, I found the middle of the book to be a slog.  I didn’t feel some of the liveliness that captured me in the beginning.  Maya, who on one level was self-aware, powerful, wanting to do the right thing, or generally “awesome”, was on another level lacking in basic “figuring out what is going on” skills, or “clueless”.  I understand that a flawed hero can make for a good story, but in this case I just lost empathy for the protagonist. I felt like I was observing a high-speed movie of a random intersection, while I should have been on the edge of my seat wondering what was going to happen. The ending picked up the pace and tied things up, but the overall outcome was predictable.   I realize that I am being hard on the author and maybe my dismay was heightened by the high expectations I developed while reading the early parts of the story.

I would definitely try another book by Roshani Chokshi. Her creative ideas were pretty amazing.