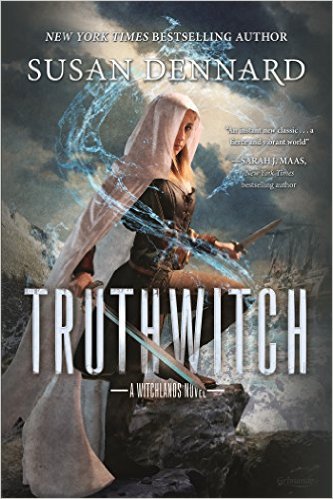 This young adult book was a great read and should satisfy teens and young-at-heart adults who yearn for adventure, humor, close calls and an engaging fast-actioned book set in an original and well-constructed world.

Safiya is a Truthwitch.  She can tell when someone is telling the truth or lying, which makes her valuable to those in power.  Her best friend and confidante, Iseult, is a Threadwitch and Safi’s “Threadsister”.  She can see a person’s emotions as colored threads emanating from them.  Safiya is a bit reckless and often acts on impulse which frequently lands both her and Iseult in danger.  It’s then up to Iseult’s quick thinking to save the day.

The book opens with Iseult trying to save both her and Safiya’s hides.  The reader learns just enough about this magical world during this first scene to get a foothold into the story.  From here characters and plots, twists and turns, are added, picking up the story’s pace, until you find yourself in the middle of a complex tale filled with many characters from various backgrounds, abilities, and countries and each involved in different developing plotlines.

Safiya and Iseult take turns narrating and take turns in the spotlight though Safiya is more central to the action.  The story is both original and full of tried and true crowd-pleasers such as chase scenes, ocean voyages, and pirates.  There is the good vs evil element, though it isn’t always clear which side some of the characters are on.  Add into the mix betrayal, friendship, romance, political intrigue, humor, mischief, thrills and chills and you have the makings of a great adventure book. The characters are fully realized with their background stories unfolding during the telling of the tale.

My interest level stayed high throughout the book.  Although there are violent scenes and sinister characters, the two good-natured and well-meaning, though mischievous, protagonists keep the tone positive and mostly light-hearted.

Calling this book a “rip-roaring tale” may seem a bit cliché but it really does fit the bill.  I’m looking forward to the sequel due out in 2017.

PrevPreviousThe Jewel and Her Lapidary by Fran Wilde
NextIs Smoking Bad for You? Smoke by Dan VyletaNext