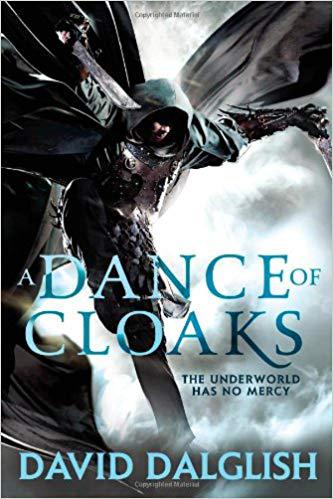 A Dance of Cloaks by David Dalglish

A Dance of Cloaks is a story with a very large cast of characters. At it’s heart there is Thren Felhorn, master of the Spider Guild, and his son Aaron. There are several other thieves guilds with their leaders and lieutenants.  There is the king and his main adviser.  There are three great merchant families, each with their family leaders, family members, and retainers.  The three leading families together formed the Trifect, which controls much of the trade. There are two cleric groups serving 2 different gods, with their leaders, paladins, and priests. There is a small group of outcast priestesses. There are numerous mercenaries, tax collectors, and … well, you get the idea. The breath of the story is what people call “sweeping,” but at its heart, in this first book, is Thren’s desire to dominate the other guilds, the merchants, and king, as well as to train his son to follow in his footsteps.

Did you remember who Thren was, or did  you have to glance back?  Right, while A Game of Thrones or Lord of the Rings introduces people slowly throughout the stories, in A Dance of Cloaks the point of view shifts within and between chapters.  So, the reader must carry the burden of keeping them straight from an early point in the story.  Fortunately for the reader, many of the characters are well developed and unique enough that keeping track was, generally, possible.  It did seem that there were a lot of redheads, though.

I listened to the audio version of the book. There are a lot of action and fight scenes in the story, and the reader did a great job of imparting the tension of those moments.  In the beginning it seemed that there were several switches of point of view in the first part of the audio that didn’t offer any or much of a pause, so I was taken by surprise. Given the large cast of characters this was problematic.  That would be an editing issue, I imagine, and not a reader issue.  The reader gave “voices” to the many characters, some with UK accents, some not.  It seemed that the voicing may not have always been consistent, though I suspect the reader got it right and the issue was the large number of characters.

I don’t usually open a review with criticisms, but I wanted to get those out of the way before talking about what was overall a very enjoyable story.  It was easy to relate to the two main characters, Thren and his son Aaron.   Their motivations propelled the story forward, and provided the underlying backbone that held everything together.  The story did not lag.  There was plenty of action as well as some over-arching plot lines that came together in the second half of the book.

In addition to the two main characters, there were a number of secondary characters that I could easily understand. If Thren and Aaron were the backbone then these characters were the meat (vegetarians, sorry for the analogy).  I liked that there were plenty of bad-ass females, as well as males, though most of them were in secondary roles behind a primary male … that ordering didn’t stand in all cases, by the end of the book.

The entire story does come together rather well by the end. I say “rather well,” because there were a few in all the plot threads that got dropped, though with all the action one might not notice.  The book ends at a clear juncture in the story, though it is very clear that there is a book two.  In fact, I think there are currently 7 books in the series.  You will enjoy A Dance of Cloaks if you like this type of genre.