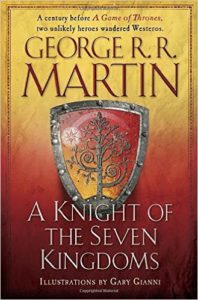 A Knight of the Seven Kingdoms by George R. R. Martin

A Knight of the Seven Kingdoms is a collection of three stories that take place in Westeros a hundred years before the events in the Game of Thrones series, a Song of Ice and Fire.  The stories are tales of a poor hedge knight, Ser Duncan (or Dunk), who tends to find himself embroiled in the political maneuvers of the royal families. He gains an unlikely lad as squire and the book chronicles some of their adventures as Dunk tries to make his way while staying true to the principles of knighthood and honor.

While the Game of Thrones books told tales of high drama, spanning kingdoms and involving intrigue and twisted plots, here George R. R. Martin tells a story from the point of view of one of the not so noble born.  The book also omits most of the raciness of the regular series, but the story is masterfully told, the main characters are likeable, and it is an easy story to read.

While the stories take place in the Seven Kingdoms of Westeros and some of the actors are members of the families that appear later, the book A Knight of the Seven Kingdoms stands on its own.  It is liberally illustrated by Gary Gianni which gives this book a different feel from the others.  I could imagine reading this book to my children, showing them the pictures, while omitting the occasional profanity and non-kid friendly bits.