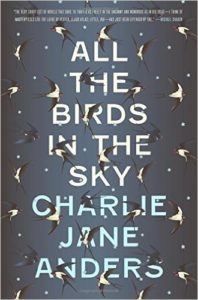 All the Birds in the Sky by Charlie Jane Anders

All the Birds in the Sky opens up with a six year old girl, Patricia, finding a wounded bird.  Immediately I felt I was entering the magical world of a fairy tale and thought that this would have been a great book to have read to my kids when they were young. It is at this young age that Patricia discovers her magical powers and that she is a witch.  In the next chapter, Laurence, who is the co-protagonist in the story but has not yet met Patricia, discovers that he is a scientist.

As Patricia and Laurence grow up, the book does as well and slowly morphs into an adult fairy tale.  Though fantasy and science-fiction are considered separate but related genres, this book is truly both fantasy and sci-fi with Patricia carrying the fantasy thread and Laurence carrying the sci-fi thread.  These 2 threads come together and then separate many times throughout the story weaving a tale that takes a critical look at human society and its place in the natural world.

As the story progresses, it becomes clear that the world is near destruction.  Patricia feels it is up to her and those in the magical world to save the earth while Laurence believes that it is up to him and his fellow scientists to save humanity.  The two are at the same time best friends, possibly soul mates, and mortal enemies.  They need each other and rely on each other but at the same time fear, misunderstand and despise each other.

This book is a whimsical yet critical look at society, technology and our (possible) future.  I love the epigraph at the beginning of the book from George Dyson’s Darwin among the Machines which really captures the essence of this story:

“In the game of life and evolution there are three players at the table: human beings, nature, and machines.  I am firmly on the side of nature.  But nature, I suspect, is on the side of the machines.”

I was curious throughout the book how the story would resolve itself and must say I was pleased at the clever and satisfying ending.