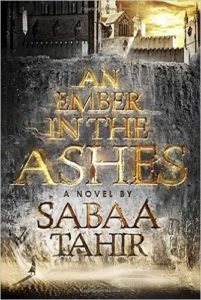 An Ember in the Ashes by Sabaa Tahir

Sabaa Tahir made quite a splash last year with her debut young adult novel, An Ember in the Ashes. Her book has been in my “To Be Read” pile for quite a while, and now that I’ve finally read it I can go right into book 2, A Torch Against the Night.

This dystopic tale is set in a land that once belonged to the Scholars, a culture that valued education and knowledge, but was conquered by the militaristic and tyrannical Martials. For the past 500 years the Martials have ruled the Empire by subjugating and terrorizing the Scholars and the other groups that live within the Empire. The Martials go on frequent raids to jail and kill citizens who break the laws, such as stealing food or selling books.

The tale is told in the alternating voices of Laia, a Scholar and Elias, a student at the Empire’s Blackcliff Military Academy. Both of the protagonists speak directly to the reader and give detailed descriptions of their life, surroundings and thoughts as well as explanations of their actions. This almost makes the reader feel like they’re a part of the story.

Sabaa Tahir has created a vivid world complete with detailed descriptions of the environment, climate, society, religious beliefs, celebrations, worldviews and the supernatural beings that inhabit the Empire.

Just as in today’s countries with dictatorships and oppressive governments, not only do the oppressed majority suffer, even those in the ruling class need to be careful and be sure to always please those at the top.

While most of the Martials revel in their privileges and their power to lead and destroy Scholars’ lives, Elias, a member of the elite military Masks, wants to leave the Empire and live a quiet life where no one will be able to command his every action.

Laia lost her parents and eldest sibling to the Martials when she was young. The book opens up with the Martials killing her grandparents, with whom she lives, and arresting her brother, now her only living relative, and torching her home.

It soon becomes clear for both Laia and Elias that it is impossible to trust anyone or to know anyone’s true motives. An Ember in the Ashes is a fast paced story full of spies, changing allegiances, derring-do, and budding romances. Teens are the target audience of this story, but adults can fully enjoy it as well.