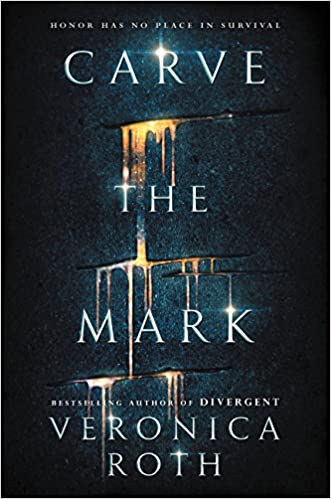 Carve the Mark by Veronica Roth

Spoiler warning – this review contains details about the story that are revealed hundreds of pages in. The book is that slow.

Carve the Mark is the first in a two book series by Veronica Roth, the author of the Divergent series. In the book two peoples share a planet. The Shotet are a warrior like people who used to be wandering scavengers and are not recognized by the council of planets and the Thuvhesit people who live on the other side of the planet who are recognized. Everyone recognizes the power of the Current, a.k.a. StarWars the Force, which runs through everyone and everything. In this world each person has a unique currentgift that manifests when they are teenagers. One such currentgift is being an oracle and all peoples except the Shotet have a person who is training to be an Oracle, an active Oracle, and someone who is the retired Oracle. Another characteristic about these cultures is that some people are “fated,” that is their fate is known by the Oracles presumably because they will play an important role in history.

Akos is a Thuvhesit teenager. His father is a farmer and his mother the Oracle. His younger brother Eijeh is fated to become the next Oracle. The violent Shotet leader sends a team to kidnap Eijeh so they can have an Oracle of their own and they also take Akos, his older brother. During the kidnapping Akos and Eijeh’s father was killed. The Shotet leader is a young adult named Ryzek whose currentgift is that he can take memories from others and give them one of his own in exchange. His father was very cruel to him trying to train him to the be next leader. Ryzek cannot handle the cruelty so he takes pleasant memories from his sister Cyra and gives her his painful ones from his father’s abuse. When Cyra’s currentgift manifests it is a painful current that runs through her and it is so strong that no one can touch her, and she can kill people by pushing her pain into them. Cyra unintentionally kills her mother by touching her. She feels she deserves the pain for what she did. Akos’ currentgift is that he can interrupt the current, so he is given to Cyra to help ease her pain. He is one of the few who can touch her. Akos wants to free his brother and is in a lot of emotional pain because he blames himself for his father’s death and Eijeh’s abduction. So Akos consumes a lot of hush flowers to dull the pain.

I listened to the audio version of Carve the Mark and the readers took turns representing Akos and Cyra. That seemed to work fine. However, the reader for Akos was very subdued and measured, which made the character seem flat. There were a few plot twists and the characters go on a Sojourn where the Shotet scavenge another planet, which was interesting. It seemed like there was a lot of effort to have good writing. For example, we were told how things sounded, smelled like, and so on, which are ways that authors help to paint a picture, but overall the book was a disappointment. I had high expectations from reading the Divergent series.