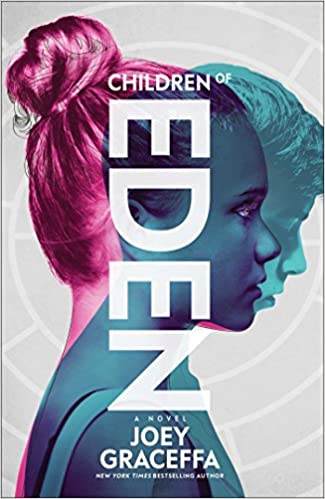 Children of Eden by Joey Graceffa

Children of Eden is a dystopian novel about a future time when the earth has suffered the Ecofail and the remainder of humanity lives within the EcoPanopticon, an artificial bubble city largely run by computers. Here humanity must stay until the earth is able to heal itself.

The main protagonist of the story is a teen girl named Rowan, who is her parent’s second child. In order to maintain the EcoPanopticon, couples are only allowed to have one child but her father, who is a doctor, hid the fact that his wife had twins. As the second child, Rowen would be killed if the authorities learned of her existence. Therefore, she has remained hidden, going outside only at night to run around their walled house, and occasionally climb the wall to peak out at the city beyond.

Meanwhile, her brother Ash leads a relatively normal life, going to school and having friends. Rowan is jealous of her brother’s freedoms and lives vicariously through the stories Ash tells her each day when he returns home.

Citizens in Eden have special eye lenses because without them they would eventually go blind due to the degradation of the atmosphere. Also, these lenses serve as an identification feature which scanners and robots use for security purposes. As a second child, Rowan doesn’t have these special lenses and if she goes out into the city her normal eyes would instantly give her away.

Rowan’s parents are mindful that she cannot live hidden in the house forever, so they arrange for a black market doctor to perform an operation to give Rowan a set of lenses and forged papers will give her an identity of member of some other family in the outer rings of the city. Shortly before the day of the operation Rowan sneaks out one night into the city and her adventures begin as she makes friends, tries to avoid the authorities who are after her, and starts to question everything she has learned about Eden.

The story has a lot going for it. The initial premise and the story world are good. Even better are the characters of Rowan and the friends she meets. There are some plot twists that keep the story moving and I generally felt invested in the story. However, there were some aspects of the writing that at times kept me from being fully engaged. For example, especially in the early part of the story there were a number of figures of speech used that are common today, but it is hard to imagine they would still be in use hundreds of years from now. There were also a few areas in the middle where the story dragged a bit.

The reader did a good job and it was easy to imagine Eden and the people Rowan interacted with. Children of Eden is the first in a series of three books and this book ends on a cliffhanger, but it felt complete enough. It is a good YA book, that raises contemporary issues for thought in a story format.