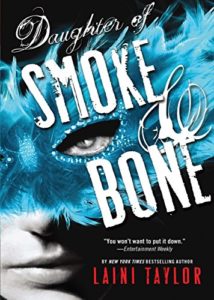 Daughter of Smoke and Bone by Laini Taylor

Daughter of Smoke and Bone is the story of a 17 year old art student, Karou, who lives in Prague.  When she gets together with her friends they share the art they have been working on,  Karou has wonderful drawings of fantastical creators in her journal that tell stories about them.  They are wonderful half-animal, half-person chimera.  Everyone loves her imagination, but what her art school friends don’t know, is that they are real.

Daughter of Smoke and Bone is wonderfully written and a big part of the story are the series of reveals.  We learn about Karou and she learns about herself.  So, I’ve already given away too much and now will talk “around” the story without talking “about” it.  In the opening of the story I liked the character Karou.  As a seventeen year old, she seemed real. I think that helps the reader accept the slow fade into the fantasy.  Secondly the story takes place in Prague.  In this I think Laini Taylor broke the rule that urban fantasies are supposed to take place in London.  It was a nice change and Taylor’s depiction of the old city was a great backdrop for much of the story.

If you have read my reviews of fantasy and science fiction then you know that I have a lot of love for creativity and good world making.  Those are the skills that distinguish the great stories from the good ones.  In the creativity / world making dimension, this story was great.  There is a love angle which seems very star-crossed and doomed to never get off the ground, but it is another part of the well woven story that works when you don’t expect it to.

The reader, Khristine Hvam, was excellent.  I imagine it was a difficult story to narrate, but she did a fantastic job.  It wasn’t just the portrayal of voices and personalities, but also the emotions and mood that tipped the story over the top.

Daughter of Smoke and Bone is the first of a trilogy.  I look forward to the next two volumes.  I highly recommend the book.  It is a favorite.