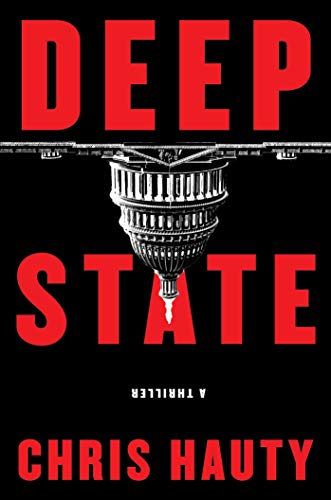 Deep State by Chris Hauty is a current day political thriller. The central character of the story is Hailey Chill, a young woman who grew up in rural West Virginia and managed to overcome obstacles and pull herself out of the downward spiral of her home community. She did this by joining the army and one of Hailey’s characteristics is that she is a fighter … literally. She is determined to succeed and is not a quitter. She is also very smart. She boxed in the army and was a champion due to her combination of determination and intelligence.

When Hailey finished her time in the army she went to college and then got an internship working in the White House. Haily is happy to still be serving her country, but she is different than most of the other interns. She is older, more experienced, and serious than the others, who seem to mainly be concerned with buffing up their resumes. This puts her at odds with most of the other interns, but she gets the attention of the senior staff who appreciate her dedication and efficiency.

As the title of the book implies, there are unseen forces at work. The politics and situation have some parallels with current day, but not totally. In the book the president bends over backwards to favor Russia and says the real enemy is China, which has the old guard up in arms. However, in the book the president had previously been a wartime general, not a billionaire. In any event, early in the book the Chief of Staff has a heart attack and Hailey suspects all is not as it seems. Could the president be in danger? She starts investigating and each rock she turns over leads her closer to learning what is going on, but also draws the bad guys attention.

This was a pretty good premise for a political thriller. Hailey is very likable and has a down to earth, salt of the earth, authentic demeanor. The reader is invested in the outcome. Watch out Jack Ryan, Hailey is on the scene.

I listened to the audio version and the reader was good. For the most part, the pacing was good. However, the story fell down in two places. First, Hailey was too skilled. Not only was she beautiful, athletic, a good fighter, smart, and principled, she also had an eidetic memory. It seemed like too much. The second problem for me was the ending. It was a twist, which I was kind of expecting, but I didn’t find the ending to fit with the rest of the story that had gone before.

This was a fun book and apparently more books featuring Hailey Chill are planned. It would make a great TV mini-series.