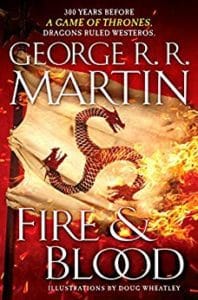 Fire & Blood: 300 Years Before A Game of Thrones by George R R Martin

Fire & Blood, by George R R Martin, provides the background history for the Game of Thrones series.  Purportedly, the narrative is the piecing together of the various histories of the Targaryen royal family’s uniting of the seven kingdoms and rule of Westeros, so as to present the most accurate account possible.  The switching between “sources” helps to keep the long tail interesting as “Mushroom,” a fool of the court, created a chronicle full of the worst rumors and basest vulgarities that are balanced against the learned accounts of the Maesters.

The story traverses almost 200 years and there are portions that take barely a chapter and others that span many.  In general, the story was interesting, as we learn some of the background to the books that take place later.  There were a few places, however, when we had moved from one generation to the next where I was not totally certain who all of the characters were.  Let’s just say that there are a lot of characters, alliances shifted, people died, some remarried, some kings and queens were deposed, and so on.  For the most part, though, this was not an issue as there were several long tales that took up most of the telling.  At one point, I found myself saddened as many of the dragons, who I think of as special creatures, were killed in stupid wars, but I guess that means I was drawn into the story.

I listened to the audio version of Fire & Blood and the reader did a very good job.  The book would be of interest to fans of the series, but probably not to others, and the format and style is different than that of the “main” books, so may not appeal to some who liked their rich drama.