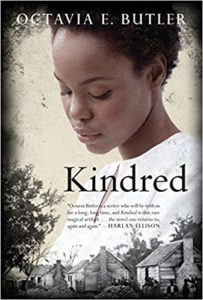 Kindred by Octavia Butler is a very creative way of looking at the horrible and troubling history of slavery in the United States.  In Kindred, the protagonist, Dana, time travels from the 1970s to the American South in the years before the Civil War and the end of slavery.  In the story, Dana is descended from two ancestors, one who was a a slave owner and the other a slave.  She is called back in time when the slave owner is in danger of dying to protect him so that she can be born in the future.  A few minutes in present day as an aspiring author equals months in the past as a slave.  The time travel provides a way to look at the life of slaves and slave owners in the light of modern day and appreciate how horrible it was.

With all science fiction and fantasy, you have to take a leap and accept the premise.  In this case, Dana can be called back into the past at any point, so ties a bag of modern day supplies around her waist, including things that we take for granted, like aspirin.  That was a bit of a hiccup for me because instead of making the leap of acceptance once and then moving past it and becoming engrossed in the story, we made the leap several times.  I found myself wondering “if I were repeatedly pulled back in time and returned to the present, would I handle it as Dana did?”

I’ve also read some of Octavia Butler’s short stories and she is a very talented writer and her prose is polished and flows well.  As this story illustrates, she is also very creative and imaginative.  I listened to the audio version of the book and Kem Stauton did a good job as reader.