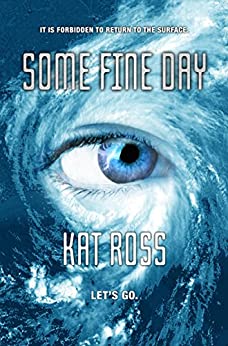 Some Fine Day by Kat Ross

Some Fine Day by Kat Ross is a dystopian story that takes place in the future. As a result of global warming massive hurricanes, or Hypercanes, arose that were so big they destroyed everything in their path. Unlike the hurricanes we are used to, these never dissipated. Consequently, people had to move underground and several large city states were formed.

The move underground happened a generation ago and the story is about sixteen-year-old Jansin Nordqvist who is a cadet at a military academy where she has been a student since she was eight and where she has learned to be a commando. Here father is a general and her mother is a botanist. She has a boyfriend, Jake, also a cadet, who she likes, but she is not sure if he is a keeper for the long term, though her dad really likes him.

As a treat for the family, her father arranges for them to go on a exotic trip to the surface. Along with a number of other tourists, they enjoy luxury accommodations on a tropical island, the tour company keeping an eye out in case any of the Hypercanes turn their way. Then unexpectedly, their party is attacked. Wait, didn’t everyone have to move underground? Who is attacking them? Jansin is taken prisoner and learns what they never told her in school. She has to learn how to survive on the surface, win the trust of her captors, and get back home. However, it is not that simple as she must reconcile the history she was taught with the truth that she is thrown into.

The main character of the story, Jansin, is amazingly created. Her personality, speech patterns, outlook on life and all the rest were very well developed. The world building was also very well done with lots of details on life underground and the difficulties people had learning to adapt. The first half of the story I was thinking this is one of my favorites. I liked the second half of the story, but not as much. I ended up giving it four and a half stars because the last part of the book stretched believability.

I listened to the audio book version of the story and the reader made Jansin come alive. Unlike some readers, the voices of the other characters were consistent, but not realistic sounding. For example, the men’s voices sounded like a girl trying to sound like a man. That was OK, because I imagined it was Jansin telling us what the others were saying. Really, the reader played a big part in making the story enjoyable. Oh, it was nice having a book that actually ended and wasn’t part of a longer series. I recommend the audio book to people who enjoy YA dystopian stories.