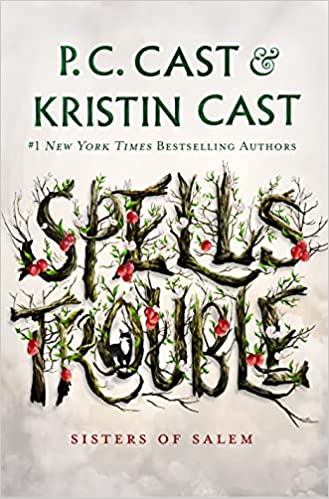 Spells Trouble by P.C. and Kristin Cast begins in the 1600s where we meet Sarah Goode and her daughter. They are locked in the town jail because Sarah has been accused of being a witch. The twist, however, is that unlike most who were accused of witchcraft, Sarah actually was a witch, and a pretty powerful one at that. She uses her powers to escape and eventually settings in the Midwest. The spot where she settles is a point of ley line convergence that attracts underworld creators which made it unsafe, but she uses her magic to close the gates so that people can live there.

Now, jump to the current day where twin sisters Mercy and Hunter, who are decedents of Sarah Goode, will take up their responsibilities as gate keepers so that the town remains safe. Mercy is outgoing, pretty, and dating the high school quarterback. Hunter was picked on and bullied growing up and is a lesbian. In some ways Hunter sees things more clearly because she is on the outside looking in, but the girls love each other and have a twin connection that helps them. They also have some good friends who stand by them. Things go wrong on a lot of levels and the twins must work through some of their family and coming of age events and situations to try and restore order.

The rest of the review contains spoilers that explain why I gave the book 3 stars.

The beginning of the story about Sarah Goode was very well written and engaging. The premise of the story and the way magic works was creative. For the most part the characters were relatable and added to the story, but the story did not seem to pick its audience well. For example, much of the dialog was very cutesy appropriate for middle grades, perhaps. The family had a cat familiar who turns into a person so the twins can stay at home and don’t have to go into foster care. OK, but the personality and actions of the cat-woman were more inline with a grade school story. Also, Mercy, who just turned 16 has explicit sex with her boyfriend and people are killed in ways that seemed more high school level.

I listened to the audio version of the story and the reader, Cassandra Campbell, did a good job. I always knew who was talking and could follow the story without issue. I value creativity when rating books and gave Spells Trouble 3 stars for that reason. The sex scene and the feelings and social interactions related to it were handled well, but because it was not clear who the audience was it stood out more than it would have if the story was clearly targeted at older teens.

There were other issues I had with the story. For example, for generations Goode witches chose Goddesses to align themselves with, but Hunter chose a God and that choice was apparently the inception of all of the supernatural troubles. Another example is that when the twins were in great personal need their friends dropped everything and ran to be with them to support them, but when their friends were in personal need the twins just called and texted. Anyway, Spells Trouble is the first in a trilogy and there is room for the authors to make the next books more consistent.