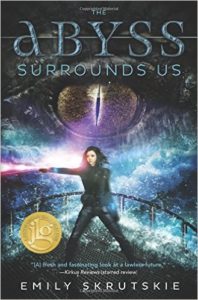 The Abyss Surrounds Us by Emily Skrutskie

I really enjoyed reading this book. The Abyss Surrounds Us takes place in the future where the political landscape has changed and giant sea creatures, Reckoners, are bred and trained to protect ships from pirates.  The story is about Cass, who has studied her entire life to learn how to raise and train Reckoners to protect ships … but what happens when she is captured by the very pirates she is fighting against?  What does it take to survive?  How can she reconcile her upbringing and training with the demands of the pirate captain?  Can she find herself and her way?

The story doesn’t lag.  It has a good pace, mixing retrospection with action.  Sometimes world making can be difficult.  The author throws you in and you have to figure out what is going on, but The Abyss Surrounds Us is easy to follow and easy to read, without sacrificing creativity and imagination.  There is something of a coming of age story and a dash or romance, but isn’t overplayed and gets you rooting for the characters.  The Abyss Surrounds Us is her first book.  She has a sequel, The Edge of the Abyss, that is coming out in Spring 2017.

This is the first book I’ve read that is eligible for the 2017 Hugo.  It sets a high bar.