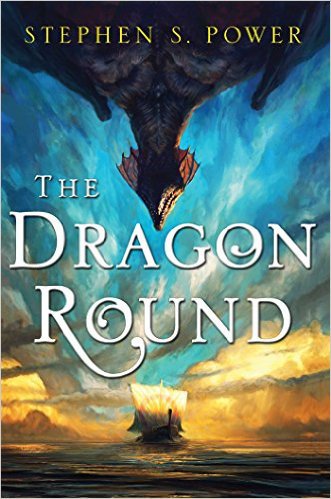 The Dragon Round by Stephen S. Power

The Dragon Round by Stephen S. Power is my first book to read in anticipation of the 2017 Hugo Awards. To choose it, I went to the “New Shelf” at the public library and looked for books with a fantasy or science fiction sticker on the spine.

The Dragon Round is a plot driven story set in an imaginary land similar to ancient Greece, both in its sea-faring galley ships and its level of technology. The story begins with the penteconter Comber bringing medicine to the plague-ridden city of Hanosh from Chorem which lies across the Tallan Sea.  What follows is a tale of dragons, mutiny, politics, corruption, greed, power struggles, war, and, most especially, revenge.

This book is split into two parts:

Part 1 takes place mostly at sea and later on the legendary island of Gladsend and focuses on Jeryon, the captain of the Comber.

Part II takes the action to the City of Hanosh and the mates of the Comber along with the wealthy galley owners, city council members and city guards, the army general and the citizens of Hanosh.  As the title (and book cover) indicate, dragons play a major role in both parts of the book.

A Dramatis Personae is included in the beginning of the book which is helpful since there is a large cast of characters for a book of just over 300 pages and the character development takes back-seat to the plot. The fact that the story is written from a 3 rd person viewpoint increases the distance between the characters and the reader. A general map is also included. It would have been helpful to me to have had a map of the city of Hanosh included as well.

On the whole, this is a good solid story with a few surprises and unexpected twists along the way.  Without giving away too much, the dragon does play a large role in the book and helps keep the action going, so this is a good book for dragon lovers. On the downside, I found it hard to connect with some of the characters, possibly because I didn’t know them well enough.

The major themes of greed, both in individuals and corporations, revenge, and political corruption were thoroughly explored and added to the story, but somehow the story lacked passion or at least failed to spark any passion in me for the characters. If the author had fleshed out Jeryon’s character a bit more and made him a little more “human”, I may have been able to connect with him on a more emotional level. Also, at some point, Jeryon went from a character I could sympathize with to a character I had lost respect for.

When dealing with revenge, there is a fine line between “the right amount” and going too far. Everyone has their own sense of where this line lies, but for me, I think it was crossed at some point in the story.

This is Stephen Power’s debut novel and can stand alone, though there is certainly room for a sequel if he chooses to write one.