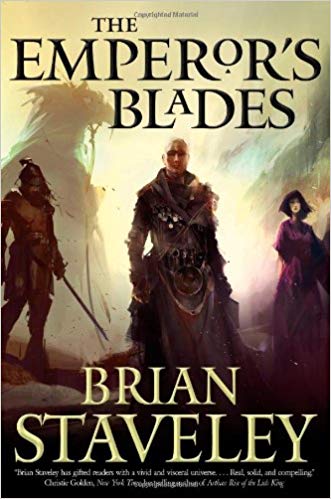 The Emperor’s Blades by Brian Staveley

The Emperor’s Blades is the story of three royal siblings, two princes and a princess, whose lives are thrown into chaos when their father, the king, is assassinated.  The eldest, Kaden, the heir to the throne, was sent away to a remote mountain monastery at the far reaches of the kingdom.  There he has endured the rigors of hard physical training and teachings of the Vanyatu, a sort of Zen-like state of mind.  His brother, Valyn, had been sent to train with the Kettral, the elite soldiers of the Empire who fly into battle on gigantic birds.  Their sister, Adare, lives in the capital and was made finance minister by her father before he died.

The story switches perspectives between the three.  Adare learns of her father’s murder first and tries to find out who was the murderer and bring them to justice.  Valyn gets a message from an unexpected source that there is a plot against his family and his life may be in danger.  His training finishes with a very dangerous test that he must complete before he can go warn his older brother.  Kaden, at the far ends of the world, is the last to learn of events, but perhaps the one in the greatest danger.

Switching points of view created some tension as each sibling learns about events at different times and each has their own challenges to deal with.  However, the lives of Valyn and Kaden got much more time in the story than of their sister, which seemed uneven.  Also, the switching between points of view got the story off to a slow start, but by the last third of the book I was hooked and it was difficult to put it aside.

The Emperor’s Blades gets points for world building.  Valyn’s training and trials among the Kettral was creative and engaging.  Likewise Kaden’s life as a monk and ideas underlying the teachings he received were described in rich detail.  Oddly, the life and circumstances of Adare did not receive as full a treatment.  We do see that she was happy that her father thought so much of her to make her, a woman, a minister, but she knew that a woman could never sit on the throne.

I listened to the audio version of the book.  The reader, Simon Vance, did a good job.  Unfortunately, several times the editing of the audio version chopped off the end of a chapter, which made me feel like I might be missing important parts of the story.