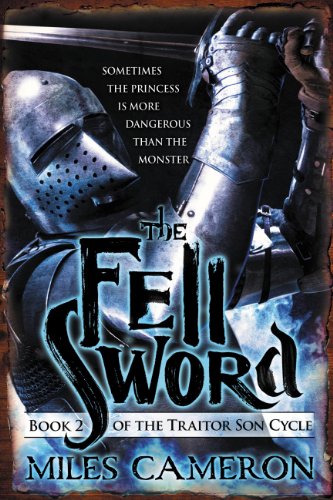 The Fell Sword by Miles Cameron

The Fell Sword is the second book in Miles Cameron’s five book “The Traitor Son Cycle” series.  It picks up where the first book left off.  The book is about a company of mercenaries and their captain, the Red Knight.  In this installment, the company comes to the rescue of the Emperor’s daughter, who is left tenuously holding the Imperial Palace when her father the emperor is kidnapped amid a coup. The company is hired to hold the palace and the city and free the Emperor.

In the first book, the company fought against the martial and magical forces of the wild.  In The Fell Sword, however, there is palace intrigue, spies, poisoning, assassination attempts, and potential love affairs.  The Red Knight is clever and well versed in the ways of war, but they are greatly outnumbered.

In this book, all of the cast of characters of the first book, along with a number of new ones, are tracked as their lives impact or move to intersect each other.  As in the first book, the story is told by shifting through the points of view of the various characters and we learn a few very surprising secrets about the history of some of the major players, including the Red Knight.  Again, this worked well, however, there seemed to be some whose stories were being spun out in preparation for further installments, and this made it a bit difficult to have a thread and follow it.  Things did start to come together by the end of the book, as we start to understand that local events may be part of a larger play for power on a great scale.

The story is well written.  I listened to the audio version and the reader did an excellent job.  In addition to occasionally difficult to keep track of points of view, the second book, while it closes a chapter in the Company’s adventures, was not self-contained and the end wasn’t much of an ending.  As they move on, there were unanswered questions for the reader and it didn’t seem settled.  Despite these shortcomings, it was a very entertaining story and I’m looking forward to book three.