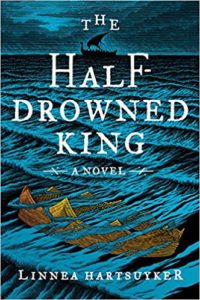 The Half-Drowned King by Linnea Hartsuyker

The Half-Drowned King is about two young people, Ragnvald Eysteinsson and his sister Svanhild, who were raised by their stepfather following their father’s death. The stepfather takes over their lands and, in theory, Ragnvald should get them back when he becomes an adult. The story takes place in the ninth century in the lands that would become Norway. If you’ve watched The Vikings on the History Channel or the BBCs The Last Kingdom based on the books by Bernard Cornwell, then the are familiar with the time period and genre.

What I liked about this book was that the Ragnvald and Svanhild are making mistakes and becoming adults against a backdrop of an historical adventure. They are sometimes on the same track, but at other times are at odds with each other. There are bigger things afoot that they are swept into. Linnea Hartsuyker is a great author who blends history, mythology, and rich storytelling to pull the reader in. The characters are believable and the reader can identify with them. The story moves at a good pace.

I listened to the audio version of the book. Matthew Davies, the narrator, did a good job. This is the first in a projected trilogy. I’m looking forward to the 2nd book due out this Fall.