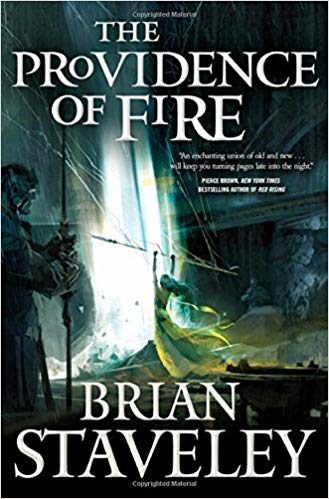 The Providence of Fire by Brian Staveley

The Providence of Fire by Brian Staveley is the second book in the Chronicle of the Unhewn Throne series.  I enjoyed the first book, The Emperor’s Blades, and was looking forward to this one. It continues the stories of the three royal siblings, two princes and a princess, whose lives were thrown into chaos when their father, the king, was assassinated.  The first book took a lot of time to develop the three main characters.  At the end of the first book the two brothers had gotten together, but they hadn’t met up with their sister yet.  This one picked up exactly where The Emperor’s Blades left off.

The story centers around an ancient race, long thought dead, who aren’t totally gone, the Ishien.  The Ishien have historically wanted to destroy the human race and the last remaining members may be trying to finish the task.  The eldest of the siblings, Kaden, has inherited some secret knowledge and had special training that he can use against them.  Meanwhile, a warlike nomadic people have come together under a great war leader and are moving to destroy the Empire themselves.  The other prince, Valyn and his squad are caught up in that action, while the princess, Adare, is unexpectedly blessed by a god.

The book has some epic storytelling that I really enjoyed, but also had a few serious flaws.  Without giving away too many spoilers, the princess Adare was seriously and totally duped by the general who took over as regent on her father’s death.  Then, when she gains power she believes in him again, just because he tells her to.  That was so incredibly unlikely that I almost quit in the middle.  Then Kaden, who is to be the next Emperor now that his father has died, makes some odd choices that are not going to help anyone, including himself.  These flaws weren’t just characters making bad choices, they were weird.  However, I finished the story and while the it was not as satisfying as the first volume, it was still a good tale.  There were many elements of the story that we very creative and original.

I listened to the audio version of The Providence of Fire and the reader was great. The book is long and I wonder if I would have finished it without a good reader to carry me along.  At this point, I’m nervous about reading the third and final volume.  Will it be better than the first volume or worse than the second?