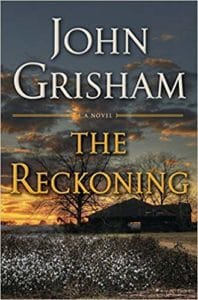 The Reckoning by John Grisham

This review contains spoilers.  The Reckoning, by John Grisham, returns the reader to Ford County Mississippi during the 1940s to 1050s where an unusual murder takes place. Pete Banning, cotton planter, husband, father, and decorated war hero, one day walks into the Methodist church and shoots the pastor.  There is no doubt that Pete murdered the pastor and he does not allow his lawyer to put up any defense.  His lawyer wants to use a temporary insanity defense.  Pete was captured by the Japanese in the Philippines before escaping and joining guerrilla forces in the mountains.  He was highly decorated for his actions and the lawyer wanted to offer that the horrors of war played a role in Pete’s actions. Such a defense might at least gain him some sympathy from the jury.  Meanwhile, things were not totally happy with the Banning family. They had been told that Pete was dead, which took a great toll on his wife and teenage children.  More than a year later, after the war, he comes home.  Mysteriously, his wife Liza, is committed to an insane asylum.  Then Pete kills the pastor.  So we have the mystery, why did Pete kill the Methodist pastor?  This is the first part of the book.

The second part of the book is the story of Pete’s experience in the army and the war in the Philippines. It is a fascinating and long story, but is told in summary narrative.  It can only loosely be considered as background to the first and third parts of the book. In this long 2nd third of the book, we do not learn anything that takes us closer to solving the mystery of the book.

The third part of the book is the attempt by the family to keep their farm following Pete’s execution. The pastor’s widow, aided by some sleazy lawyers, goes after the property in a wrongful death lawsuit. Hints at solving the mystery are few and far between, but the general best guess is that the pastor may have had an affair with Pete’s wife during the war.  There is a long, drawn-out series of court cases and legal maneuvers.  Finally at the very end we learn the truth, and it is a very unsatisfying ending.

I approached The Reckoning as a legal thriller, much like most of Grisham’s other works.  From that perspective, the summary above shows why the story was problematic. Perhaps, instead, we should look at the book as being about Pete?  That would make sense in regards to the first two sections, but not the third.  Throughout the story the social environment of the American south provides the backdrop for the story.  The Bannings, well to-do cotton farmers, have a number of black servants and workers who live on their land, the children of former slaves. In the jail, there is a “white” section and a “colored” section.  The jury for the trial consists of 12 white men.  At the end, with things in disarray and the farm in jeopardy, there is no protection for the black people and their lives are subject to decisions beyond their control.  From that perspective, perhaps it was meant as a social commentary.  However, it doesn’t pull it off.  If that was the point, there was not enough “showing” of the full fabric of life in that time and circumstance, and too much focus on the war and the long, drawn-out legal process.

I listened to the audio version of the book and the narrator did a very good job.

The Reckoning is not recommended.  It seemed it needed more rewriting, not because of the prose but because the point being made didn’t clearly match much of the content.