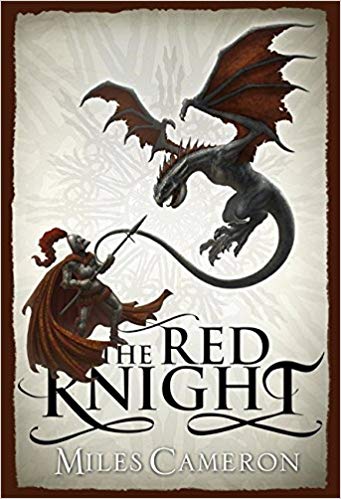 The Red Knight by Miles Cameron

The Red Knight by Miles Cameron is a sword and magic type of fantasy story. The Red Knight is a bit of a mysterious character. He is the leader of a mercenary company and is unusually young to hold that position. In the early part of the book we know that he comes from a noble family, perhaps a bastard (?), but is unsettled with himself and his past. There are knights, squires, bowmen, camp followers etc in the company. They travel from conflict to conflict hiring out to make a profit.

The company gets a contact to defend an abbey. Creatures of the wild have been crossing the borders separating the human settlements from the inhabitants of the wild, many of whom are magical (demons, trolls, “boglins” etc).  However, the Abbess was not totally forthcoming and the Red Knight and his company end up in the middle of something much bigger and more dangerous than they bargained for.  Can they hold on until help arrives?

The story is far reaching and there is a large cast of characters, as they story lays the ground work for several books.  Not to fear, this story does stand on its own, but we are introduced to a number of players with their own perspectives and agendas.  The writing style captured that by switching the point of view from character to character so that we could follow the unfolding events.  This generally worked well, though there were a few places where the switching was too frequent and became an annoyance.  Character development is good.  There are characters we grow fond of and invested in, such as Big Tom and Sauce, two of the Red Knight’s lieutenants.  There is also a very powerful nemesis who doesn’t care what he must do or who must die, he just wants power.

The magical system was creative and worked well.  There was some magic among people, though it was supposedly rare and often untrusted.  Among the creatures of the wild, however, magic was more common and this was one of the conflict points between ordinary folk and the creatures of nature.  The magic of humans was represented as “power of the light” as opposed to the earthly magic of nature.  Somewhat surprisingly, many of the humans practiced a form of Christianity.  This seemed like a bit of an odd twist, but it worked fine and didn’t derail anything.

The story moved along well, there was plenty of tension, and a few surprise twists.  It did seem a bit long, but I never lost interest.  I listened to the audiobook version of the book and the reader was very good.  The Red Knight is the first in a five book series and there are plenty of seeds sown for further conflict. In fact, the last section of the story was really a segue for the next volume, perhaps part of the reason this one seemed long.  A great book for fantasy lovers.