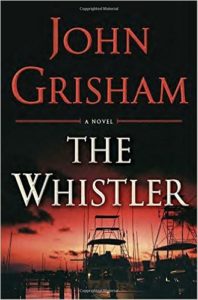 The Whistler by John Grisham

I remember it was a Saturday morning and I was working at the Public Library.  I had been given the job of going through the leased books on the new bookshelf and sorting them into the ones we wanted to keep for the library or the ones we were going to send back.  I picked up a copy of The Firm, by John Grisham.  I read a lot and helped with reader advisory, but hadn’t heard anything about this book.  I read the flyleaf and thought it sounded interesting.  I put it in the keep pile and checked it out myself at the end of my shift.  I returned it to the library on Monday morning, having read and thoroughly enjoyed it.  It was shelved with the fiction, but brought back to the “new” bookshelf in the front a few weeks later when it became popular.  So, yes, I’m a Grisham fan and when I saw The Whistler I jumped it to the font of my reading list.

The main character in this book is a lawyer who works for the Board of Judicial Conduct for the State of Florida.  The BJC gets a complaint about a corrupt judge, which is what gets the story rolling … kind of.  As the investigation progresses the action picks up steam … kind of.  There is organized crime, intimidation, judicial corruption, money laundering, murder, wire tapping, and grand jury indictments. The reader is pulled into story as the FBI and prosecutors go after the bad guys and the reader experiences the inner workings of the judicial system … didn’t happen.  It seems like all of the ingredients are present for a good story, but The Whistler is not as well written as most of Grisham’s other works.

You know the advice you got in high school composition class on fiction writing:  “show, don’t tell the story.”  The idea is that the reader is able to get into the story more if they can experience it through the actions, thoughts, and feelings of the characters, not by a neutral third party monologue.  The Whistler seems like someone made an outline of the story, collecting information for the different sections, summarized those, and then strung them together.  It is still a readable story, but not very satisfying.  I expected more from Grisham.