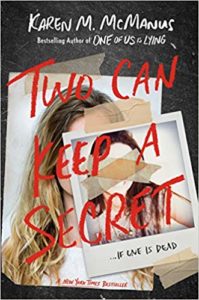 Two Can Keep A Secret by Karen McManus

Two Can Keep A Secret is about a twin brother and sister, Ellery and Ezra, who are sent to their mom’s home town, Echo Ridge, for their senior year of high school. It is a very small town where everyone knows everyone else … and their business.  Ellery is into true crime books and movies and she has a reason to be.  Her mom’s twin went missing during home coming when their mom was in high school and that is an unsolved mystery that her mom won’t talk about.  Five years ago Echo Ridge experience another tragedy, a home coming queen was murdered, another unsolved mystery.  Now the town is terrorized when someone makes anonymous threats against this year’s home coming court and Ellery is experiencing true crime in real life.

The story switches between two points of view, Ellery’s and Malcolm’s.  Malcolm is the kid brother of a boy who was suspected in the murder 5 years ago and Malcolm finds himself a suspect now … but, there is an attraction between Ellery and Malcolm, which provides a romantic side to the story.  In the first few chapters Ellery has an amazing vocabulary and I get the sense that she is super smart … but later in the book it is more normal, which was a small discrepancy.  I listened to the audio version of the book and there were two readers who did a good job in presenting the two characters.

In a good mystery the characters are learning new things and struggling to figure out what is relevant and what is not, as well as what the clues mean.  At the same time, the reader gets the same clues and, because we are outside the flow of events, we might have a better chance to figure things out.  Of course, as readers, we also are caught up in the story, so figuring things out isn’t as easy as it sounds.  The author Karen McManus did a great job putting together the mystery and the clues.  I didn’t figure it out, but realized that the pieces were there, and the author makes them clear, if I had stopped to think about it.  So on the mystery level, this story is great.