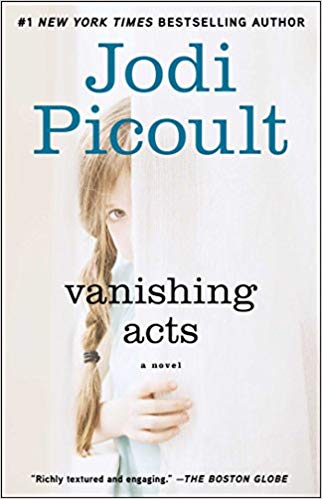 Jodi Picoult’s Vanishing Acts is the story about Delia, her daughter, her father and mother, and her friends.  Delia was raised by her father and since her mother died he did everything he could to give her a good childhood.  She is engaged to Eric, one of her childhood friends, and the two of them have a daughter Sophie and are engaged to be married.  Their other childhood friend Fritz is a reporter for the local newspaper.  Delia still lives with her father and he is helping to raise Sophie.  Delia does search and rescue with her bloodhound Greta.  Then the police come to the door and arrest Delia’s father, for kidnapping a young girl many years ago … Delia.  It turns out that her mother is not dead, as she had been told, but instead her father abducted her during a custodial visit.

Like other Picoult’s books, Vanishing Acts looks at an aspect of modern society from a different perspective. In this case it is from the point of view of a woman who was abducted as a child. Her father had fled taking her with him, changed their names, told Delia that her mother had died, and she had grown up without her mother.  Now, a mother herself, Delia can emphasize with her own mother, whose child was abducted, while at the same time loving her father who has always taken care of her.  This disconnect and warring feelings are played out during a court case when her father is brought to justice for his past crime.

Picoult is a good writer and there is nothing wrong with the prose. The premise of the story provides a rich field for exploring questions of love, identity, and trust.  Also, several characters in the story were alcoholics and the impact of this social problem and disease was well illustrated.  However, the story was flawed, in my opinion, by some of the author’s choices.  Spoiler alert.  Stop here if you have not read the book and intend to do so.

The strong parallel between Delia’s profession, search and rescue, and the fact that she herself had gone “missing” was well played.  However, even though there were several places in the story where Delia and Greta worked together, I didn’t get any sense of love for the dog. It seemed too business like.  As a dog owner, I would have liked to see Greta as more a part of the family.  While that was a smallish thing, a major issue for me was that her father, who runs a senior center and by everyone’s account is a wonderful person, goes down a very dark path while in prison awaiting and during the trial.  This is so at odds with everything else in the book that it was a real detraction from the story line.  Perhaps a book about what could happen to a person sent to prison would be a good topic for a story, but that turn in the story didn’t fit.

There was a love triangle between Delia, Eric and Fritz.  Even though Delia and Eric were in a relationship and had a child together, Fritz still hung around because he was in love with Delia.  How that plays out and ends could have been done a bit better.  One, Delia was clueless.  Two, she seemed to take Fritz for granted and use him.  Three, when Delia is confronted with the issue, her choice seemed more of circumstance than love.

I listened to the audiobook version of Vanishing Acts.  There were three narrators: Jonathan Davis, Julia Gibson and Sharon Washington who took turns reading for the different characters.  They are good readers, and this generally went well, except as the point of view changed and dialog was portrayed, you had things like the father’s voice being done by three different people.  That was a distraction in the beginning, but fell away as the book progressed.  Jodi Picoult has several very good books, but I didn’t feel that Vanishing Acts for one of her best.