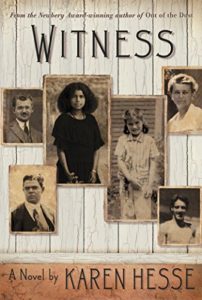 Witness is a Reader’s Theater written in free verse with 11 distinct voices. The audiobook cast features a different reader for each character which really brings the book to life for listeners. The audio also includes an interview with both the author Karen Hesse and the historian Leonard Marcus.

This is a short but powerful book.  The story is told from the first person point of view of 11 separate “witnesses”, each of whom describe the events that unfold when the Ku Klux Klan comes to a small town in Vermont in 1924 to recruit members and join the community. Each character voices his or her own opinion of the Klan’s effect on the town and how they perceive what actually happened while the Klan was there. As the Klan focuses their (unwanted) attention on 2 girls, one African American and one Jewish, many of the town’s folk must reconsider their original impressions of the Klan and whether or not they want them to become a part of their community. Karen Hesse’s writing is spare and to the point but, despite this, the characters are all well developed and fully realized.  This audiobook packs quite a punch and will stay with you long after you’ve finished listening. 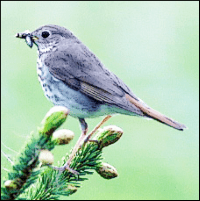 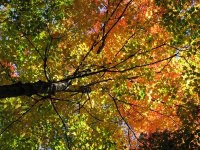