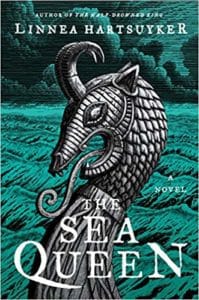 The Sea Queen by Linnea Hartsuyker

The Sea Queen by Linnea Hartsuyker continues the story that began in the Half-Drowned King.  Ragnvald has sworn to King Harald, who wants to unite all of Norway under his rule. The first book focused on Ragnvald’s rise as a warrior, and  his sister Svanhild played a more minor part.  In The Sea Queen Svanhild has grown up and plays a more central role.  Svanhild is married to Ragnvald’s enemy Solvi Hunthiofsson, a renowned sea captain and raider.  Svanhild learned the ways of the sea and how to captain a ship from Solvi.  Together they traveled, raided, and visited the great cities of the world.  While they love each other, there is also a lot of conflict in their marriage.

One of the conflicts that Svanhild deals with is the role of mother and woman among warriors and kings.  She wants the freedom to go where she wants and do what she wants. The men want their wives to bare them children, which means a loss of that freedom, sometimes from necessity and other times because of the expectations of women’s roles.  This is a strong theme in the book that provides tension and character insight.  Another theme is that of loyalty, friendship, and betrayal. Alliances shift and there are questions of applying King Harald’s laws when it isn’t convenient to do so.

The story is fast paced and the reader was excellent.  However, I didn’t feel that the story was as polished as the first volume.  Also, I noticed that the series title now refers to King Harald (the Golden Wolf) and that is a bit off-putting. The story is very much about Ragnvald and Svanhild, with the conquest and unification of Norway being the backdrop on which their stories play out.  However, overall it was a good sequel and I’m looking forward to the last book in the trilogy.