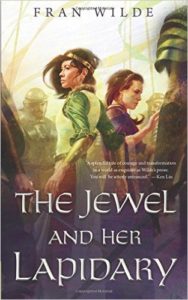 The Jewel and Her Lapidary by Fran Wilde

Fran Wilde not only creates a unique and imaginative world in this novella, but also gives us philosophical and moral dilemmas to ponder. In a kingdom reminiscent of ancient Rome, gems have the power to control and influence people. Most cannot hear the gems, but Lapidaries, those who can hear them, must be trained to control the gems and harness their power or else go mad. Jewels, the elite rulers of the kingdom, each have a Lapidary bound to them. A Lapidary helps their Jewel by magnifying the quality a Jewel may need at that moment: courage, healing, wisdom, and so on.

The book begins just as the kingdom is being overthrown. All the Jewels and their Lapidaries are murdered except the youngest Jewel and her Lapidary. The commander of the army which has invaded the Jeweled Court demands that Lin, the last Jewel, hand over the last of the most powerful gems along with her Lapidary, Sima, and marry her son.

At this point Jewel Lin and Sima must take stock of their options and decide, with the limited options available, what they must do and what’s really important in the long run.

A nice touch that Wilde added to the story was to have quotes from a present day guidebook to the ruins of the ancient kingdom, obviously written centuries if not millennium after the time of the story, interspersed throughout the tale giving the modern interpretation of that earlier civilization.

This tightly written novella keeps the action moving while doing a good job of world building and character development. A well-earned solid 4 rating.